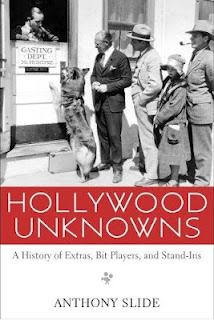 Extras, bit players, and stand-ins have been a part of the film industry almost from its conception. On a personal and a professional level, their stories are told in Hollywood Unknowns, the first history devoted to extras from the silent era through the present.

Hollywood Unknowns discusses the relationship of the extra to the star, the lowly position in which extras were held, the poor working conditions and wages, and the sexual exploitation of many of the hardworking women striving for a place in Hollywood society. Though mainly anonymous, many are identified by name and, for perhaps the first time, receive equal billing with the stars. And Hollywood Unknowns does not forget the bit players, stand-ins, and doubles, who work alongside the extras facing many of the same privations. Celebrity extras, silent stars who ended their days as extras, or members of various ethnic groups--all gain a deserved luster in acclaimed film writer Anthony Slide's prose. Chapters document the lives and work of extras from the 1890s to the present. Slide also treats such subjects as the Hollywood Studio Club, Central Casting, the extras in popular literature, and the efforts at unionization through the Screen Actors Guild from the 1930s onwards.

Review
Their performances contributed to many movies which wouldn't have been realized without them. Unknown and unnoticed they added substance and atmosphere, yet they did not exit in the credits nor did it matter whether they even had talent. In his book Hollywood Unknowns Anthony Slide delves into the early days of the film industry, highlighting the big part extras, bit players, and stand-ins actually played.
The author manages to convey the vibe of the film industry wonderfully well, fills it up with well researched accounts and surprising tid-bits, all spruced up with photos showing extras at work. Granting detailed insights into what happened behind the scenes as much as in front of the camera, Slide does not shy away from accentuating the dark side of the industry either, broaching subjects such as sexual exploitation or racial issues. I found this book mesmerizing and disillusioning at the same time.
I admit, particularly the small details made this read so engaging for me, eg how casting telephone operators adopted a form of abbreviated speech and the most depressing one syllable you could hear was "Nerk" signifying "no work". Or how about extras needing to own certain outfits to even stand a chance to get a part. You mightn't need talent, but certainly the right wardrobe.
An amazing portrait of those nameless faces lost in the crowds. Film buffs, you'll need to read this one!
In short: An utter delight for all film aficionados!

Disclosure of Material Connection: I received this book free from the publisher through the NetGalley book review program. I was not required to write a positive review. The opinions I have expressed are my own.
Eingestellt von Birgit um 10:10