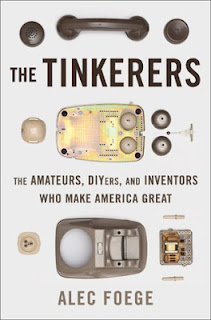 Once upon a time, the United States was a nation of tinkerers – amateurs and professionals alike who applied their ingenuity and talent to the challenges of their day. Guided by the curiosity of an inquiring mind, a desire to know how things work, and a belief that anything can be improved, they came up with the inventions that laid the foundations for the American century. Today, it seems that that can-do spirit has been overtaken by a general hopelessness around intractable problems. But as Alec Foege shows in The Tinkerers, reports of tinkering’s death have been greatly exaggerated.
Think tanks and companies have recognized the benefits of tinkering and have done their best to harness and institutionalize it, but they lack either the resources or the will to truly allow it to flourish. And as anyone who has overpaid for a simple smartphone repair knows, the complexity of modern systems can be needlessly intimidating. But ours is a nation that achieved its strength through the accomplishments of its innovators, and the tinkering tradition remains, in new and unexpected forms, at the heart of American society and culture.

Review
When I first heard about The Tinkerers by Alec Foege I had to think back to my own childhood days when my grandpa would tinker around on all kinds of gadgets and our TV set got repaired by a tinkering friend at least a dozen times.

In this spirit the author sets out from the tale of his own tinkering experience of repairing his smartphone, before delving deeper into history and technology, exploring tinkering from the birth of the nation straight to the hope of recovering the tinkering spirit through respective changes in the educational system.
Written in a sweeping and entertaining way, Foege certainly understands to pull you right in with his opening chapter. Then, however, I found myself faced with the sudden realization that the author and I have a completely different understanding about what tinkering means. A promising introduction is followed by, more or less, inventing things, and while this is certainly interesting it's neither what I had expected nor what I had been looking to read about.
Despite the misleading title the book is certainly rich in content and opens a fascinating perspective on the tinkering mind-set of the American people. Especially the emphasis on how Americans may, and should, rediscover their tinkering spirit, and the important part that education plays in this regard, was well worth the read and made up a little for what I conceived as missing the point of the topic.
In short: Manifest for reviving the American tinkering spirit!

Disclosure of Material Connection: I received this book free from the publisher through the NetGalley book review program. I was not required to write a positive review. The opinions I have expressed are my own.
Eingestellt von Birgit um 10:10