Writer at Work aka The Indefinite Hiatus

After some careful deliberation I have decided to put my book blogging on the back burner for the foreseeable future. Even if you're only posting a couple times a week, and my fellow bloggers will certainly attest to this, the idea gathering and planning and researching and typing does take more time than most would think. Of course, maybe I'm just really awful at this thing called "time management". As I plan to devote more quality writing time to, well, writing I won't be around the blog much. Obviously I will not be gone completely, but I seriously need to show my inner procrastinator/slacker who's the boss. There are so many unfinished writing projects and yet more new ideas are rolling in all the time, it's downright scary. Suffice to say, I need to get those out of my system before my nightmares become a reality. I kid you not, my stories have literally started haunting me in my sleep. Exciting dreamscape? You bet. Come to think of it, that might make for a great plot idea too ...

That being said, I will post shortish updates on Sundays. Plus, it will also be business as usual with my reading challenges.
Eingestellt von Birgit um 11:00 2 comments:

While many already enjoyed a nice vacation during the summer I will do so in September which will mostly be spent traveling through the Scottish Highlands and I might even squeeze in a cuppa tea with the Queen. That said, I shall be back refreshed and with a subtle British accent in October!
Eingestellt von Birgit um 11:00 6 comments: 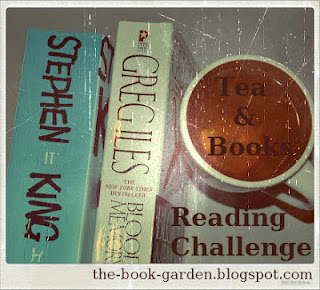 Not so long ago we had half-time and look at that - two thirds of the year are already history and I sure hope you all put it to good use. Just remember, as you are nearing the end of your pocket calendars, so should you near the end of the tome you're currently reading. And if you're not currently reading one, what are you waiting for?

I'm happy to say that I listened to the little angel on my shoulder (it helped that the angel knocked out the devil on my other shoulder with a heavy tome) and went for an upgrade to the next level. I'm now officially trying myself on the Earl Grey Aficionado level and even more so I already finished one of the two books I will need to achieve this goal - Blood Memory (Greg Isles). Not sure about which chunkster to tackle next, because it looks as though I have way too many books that fall short of a few *cough* fifty to hundred *cough* pages. If all else fails ... book shopping, yay!

Curious about who is participating in the challenge? Go here.

Updates for the challenge will be posted regularly on Sundays near the end/beginning of a month and the next date will be October 27th (due to my absence in September).

Which tomes did you read this month? How far along are you in this challenge? Feeling the need to upgrade (or maybe downgrade, haha, just joking)? Please share.
Eingestellt von Birgit um 15:10 6 comments: 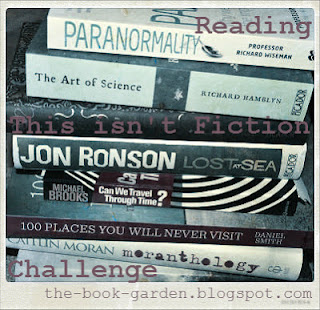 Eight months of reading should have brought as all a huge step closer to our chosen level in this reading challenge. I hope you all agree and that no more than one or two of you are falling into full fledged panic-mode now. Just relax, you've still got four more months ahead of you. On second thought, just because I can sit back and relax doesn't mean you should too!

As for myself, I've read two non fiction books this month - SuperSense (Bruce M. Hood) and Orwell's Cough (John Ross) - which brings my grand total to 22 books. In other words, I already reached the College level back in June, but obviously I'm not being shy about picking up some more books that aren't fiction.

Curious about who is participating in the challenge? Go here.

Updates for the challenge will be posted regularly on Sundays near the end/beginning of a month and the next date will be October 27th (due to my absence in September).

Which non fiction books have you read this month? And most importantly, how far along are you in this challenge? Reached your level? Want to upgrade? Please share.
Eingestellt von Birgit um 15:00 3 comments:

You might remember my resolution of not buying more than six books each month? Looking back over the course of the year I have to say, I've done exceptionally well in that regard. Granted, I've been splurging a bit the previous month, but there were also months of no book buying at all. Bottom line - I could have added 48 books (if I had stuck to the six books a month rule) and the great total of acquired reads comes to ... 29 ... can you actually believe it? *tremendously proud of self* Of course it could have been just 25 if only I hadn't ...

... done some damage in the Kindle Summer Sale on Amazon. On second thought, seeing how I only grabbed four out of 300 available bargains, I did behave. 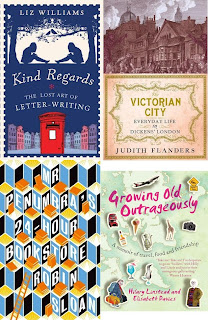 Email ThisBlogThis!Share to TwitterShare to FacebookShare to Pinterest
Labels: the postman files

The Reading Files - Beam me up, Scotty!

This week was dedicated to, shall we say, adventurous reads? As much as all the books sounded as if I'd thoroughly enjoy them they were all, without exception, duds. Not to say they were horribly awfully bad, but close enough ...

Thoughts. What do you get when zombies start invading a Star Trek convention? Basically, this book. A parody that merges two themes I love seemed like a good idea at time of purchase, but honestly, this novel is so silly it's not even funny. In fact I only laughed about one minor scene. Borderline boring and far too cheesy for me!

Random quote. He sighted the first zombie carefully and pumped a single round straight into its chest. Nothing happened.
"You missed!" Leia said.
"I didn't miss," Jim Said. "He just doesn't care."
(p. 96)

Thoughts. What do you get when a medical doctor come author reads too much Jules Verne? Basically, this book. The small crew from a submarine gets sucked into a kind of Utopia which inevitably leads to them disrupting peace there. Cookie-cutter characters, no surprises whatsoever, and a stupid ending if I ever saw one.

Last words spoken. You've got to be from that college up the Charles River. You Harvard fellows are always making fools of yourselves.

Verdict. Oddly unimaginative sci-fi ride to the bottom of the sea!

Thoughts. What do you get when Indiana Jones tries to save the world Tomb-Raider-style? Basically, this book. Fast-paced, action-packed, and unbelievably over the top this would be fantastic Hollywood blockbuster material. As a novel however it's just plain shallow and implausible which is a shame, because the plot idea had potential.

First line. It towered like a god above the mouth of Mandraki harbor, the main port of the island state of Rhodes, much like the Statue of Liberty does today in New York.